The last load of offshore wind farms foundations swum away from Szczecin. Thus ST³ Offshore has finished the project for Danish energy concern.

Jackets have been produced as a part of the 2nd contract for Ørsted. The load of first three jacktes has been realized on the 23th of February. The load process was very comlicated – only the preparing of needed documentation took few months. It had to be accepted by the insurer, classification societies and of course by the client. Setting the constructions in grilleages required extreme precision and depended on weather conditions. The first load out took 4 days. Thanks experience of the logistic staff next operations proceeded quicklier – the fastest one – 1,5 a day all load out and 1,50 h – one jacket).

The 7th load with the last two jackets left Szczecin on the 12 of June. We are satisfied with the project’s execution – said Adam Kowalski, vicepresident of management board of ST³ Offshore. 18 from 20 jackets have been delivered to the client. Four of them have been set on the Borkum Riffgrund 2 offshore wind farm. The contract has been realized successfully and accordoing to plan agreed with the client. It lets us see the future in optimistic colours – added the vicepresident.

We are able to produce all huge stell structures, but we also take into account other contracts, not necessary from offshore core business – stressed Andrzej Czech, the president of the management board of ST³ Offshore. The company is negotiating new contracts, still the details are a trade secret.

Following on from the successful execution of Ørsted’s Race Bank Transition Pieces (contracts signed in 2015), Ørsted has awarded ST³ Offshore with a second contract to fabricate 20 Suction Bucket Jackets, for the Borkum Riffgrund 2 OWF. Jackets produced for this project are foundations designed on an equilateral triangle plan (footprint: 28 m), 60 m high, set on suction buckets.

Borkum Riffgrund 2 will be located approximately 34 km North of the island Borkum in Germany, 54 km off the coast of Lower Saxony, next to Borkum Riffgrund 1.
The Borkum Riffgrund 2 Offshore Windfarm has a target power generation capacity of 450 MW using turbines mounted on a total of 56 steel foundations where 20 foundations are jackets and the remaining 36 foundations are monopiles. It will feature the largest wind turbines in German waters: 56  MHI Vestas 8 MW wind turbines with rotor spans of 164 meters. The offshore wind farm will supply CO2-free power equivalent to the annual electricity consumption of approximately 460,000 German households. 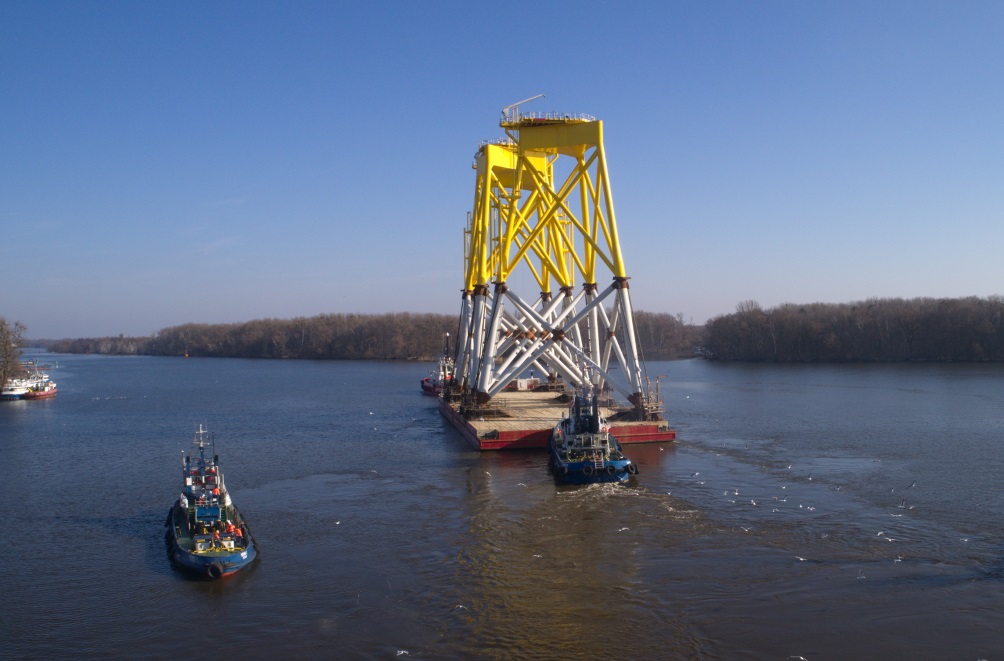